What Taking Pictures Taught Me About the Power of Play 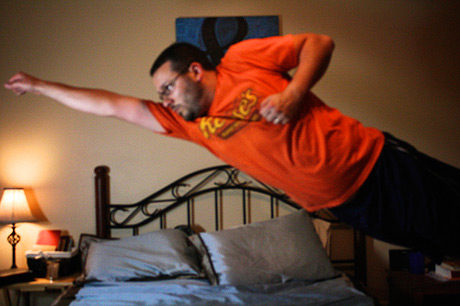 The photo above is not some Photoshop trick. It’s a real shot of me responding to a damsel in distress whom I heard with my super hearing.

(Actually it’s the result of dozens and dozens of violent leaps onto the bed hoping my camera and his self-timer with continuous shots feature would capture something cool. We almost lost Kim’s bedside lamp and days later, my neck and back still hurt, but it was totally worth it.)

So I am two weeks in to the online photography course I signed up for, and am having a good time. I think the fact that it cost some money has helped to spur me into action. That combined with the inspiration and encouragement from the other participants has really provided the accountability I’ve been looking for.

One thing I’ve learned (re-learned?) so far is that starting is the hardest part. When the vision of what you want to accomplish is so grand, such as forming a new habit or amassing a portfolio of kick butt photos, it can be really intimidating to take that first step. But once you take it, you start building momentum and it becomes easier. And more fun.

The biggest thing that I’ve become reacquainted with is the power of play. Many of the prompts we’ve been given have been of a playful nature, such as “a riot of color”…

My best shots so far have been the result of just playing around with the camera. The first week, the instructor (aka the amazing Andrea Scher) encouraged us to try shooting things without even looking through the viewfinder. That was weird at first, but incredibly freeing! And it allowed me to get this shot of upside down leftovers in the fridge I never would have gotten otherwise:

It seems that photography is like art and most things in life: Greatness comes not when you’re trying to create something great, but when you’re goofing off.

I knew I might be trying too hard after I snapped this one of Lucy. Did I get this by successfully coaching her to deliver the perfect expression? Had I been working hard to manipulate the light to produce such warm soft highlights?

I shot this without looking through the viewfinder with the camera on automatic “P” mode while I was trying to get a breathtaking shot of…gum balls.

I’ll say it again: Greatness comes not when you’re trying to create something great, but when you’re goofing off.

Another case in point is this one I shot just last night after Lucy was finished with her bath. (Hat tip to Kim for suggesting this as a possible subject):

The neat thing about this is that it was totally spontaneous. And it was probably the 22nd of the 30 shots I took. While importing them into my computer, I noticed the first shot was pretty boring. So was the second. And the third. But once I stopped looking through the viewfinder and started holding the camera at an angle and perilously close to the surface of the water, I got something pretty great.

It made me think of my experience doing comic strips or logo designs or greeting card verses, and how the best ideas are hardly ever the first ones.

Once again, another lesson that bleeds beyond the field of art.

In our fast-paced, instant gratification culture, too often we’re searching for good enough, and settle for the first decent idea that solves the problem at hand. Whether you’re in a brainstorming meeting at work or huddling with your husband trying to figure out a way you can stay home with the kids AND bring in a bit of side income, it’s when we push past the obvious ideas — and start having some fun — that we get to the solutions that are truly great.

Oh how unfortunate it is for us — and yet deliciously satisfying for Adultitis — that we routinely underestimate the power of play.