Serving Fun as the Main Course with a Side of Crazy 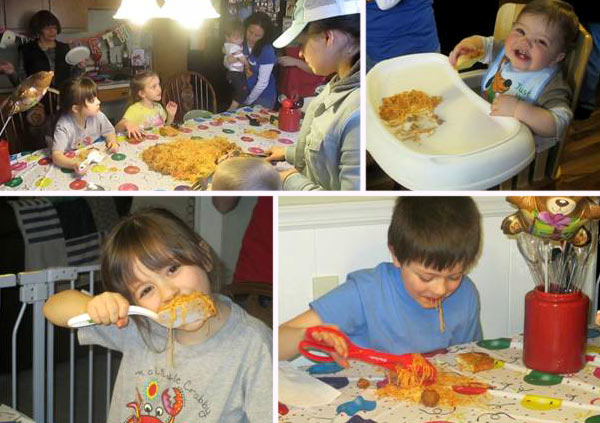 Spatula City is a meal in which everyone eats dinner with unconventional utensils. Think spatulas, spaghetti forks and soup ladels.

Barbarian Spaghetti is when you eat spaghetti without plates.

We tried it for Ben’s first birthday and it was a smash hit. Recently, Missy Herman of North Dakota took the plunge for her son’s first birthday as well. (See photos above). My favorite part of the video she sent me on Facebook occurred right after the the pile of spaghetti and meatballs had been dumped on the table. One of the kids gleefully exclaimed to the people just entering the room, “Dad did that on purpose!”

One thing’s for sure: spaghetti may have been on the menu, but fun was the main course.

It reminds me of Corinne Hanson, who also pulled off the Barbaria Spaghetti / Spatula City double doozy with her family on on Christmas Eve.

I share this idea often in my speaking programs, and lots of people laugh at the idea of it. But it takes a special person to have the courage to try it out on unsuspecting friends and family.

We call them Champions. Congrats, Missy and Corinne!