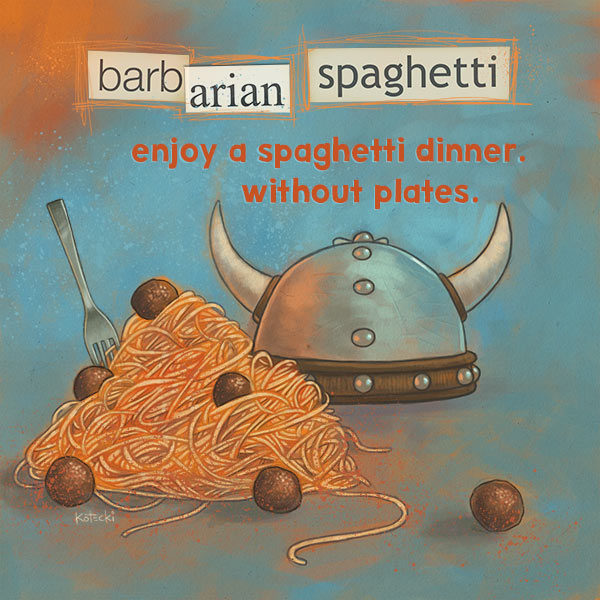 Did you know that spaghetti has Adultitis-fighting superpowers? As long as you keep it off of plates, that is.

This is one of the more polarizing ideas I’ve shared in any of my speaking programs. The thought of eating a spaghetti dinner sans plates either causes people to roll their eyes in disgust or exuberantly start planning when to do it.

Those who are hesitant are mostly concerned about the spectacular mess they imagine will be created. Granted, this is not a Martha Stewart-approved event, but it’s not as bad as you might think. Some have their fears alleviated when I suggest using a plastic tablecloth that can be rolled up and thrown away afterwards. In many ways, this makes cleanup easier than most dinners! Doing it outdoors as part of a picnic is also a way to minimize the mess.

As you might expect, children, who are weary from always being reprimanded to be more “civilized” at the dinner table, love Barbarian Spaghetti immensely. But it is a great gift to give grown-ups, too. We spend way too much time worrying what other people think, and that can be pretty exhausting. It’s fun to give others the permission to have fun, be a little silly, and not take themselves so seriously.

We’ve done this a few times, including Ben’s first birthday party and at last year’s Escape Adulthood Summit. I am pleased that many audience members embrace it, and send me photographic proof.

I can assure you that in each case, the only one disappointed with the outcome is Adultitis.

Have you ever participated in a Barbarian Spaghetti dinner?