The Biggest News Since the Birth of Our Kids 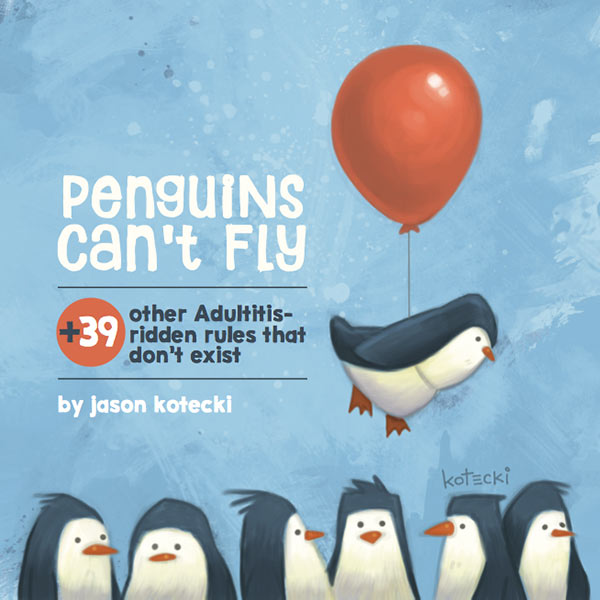 As of today, Kim and I have been married for 14 years. So it seems like a good time to share some super exciting news with you guys…

We recently finalized a book deal with a major New York publisher!!! 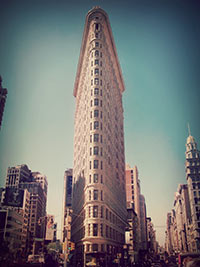 St. Martin’s Press, which is owned by Macmillan Publishers, is headquartered in the Flatiron Building in New York City and is considered one of the largest English-language publishers. They loved the concept for my next book, “Penguins Can’t Fly and 39 Other Adultitis-Ridden Rules That Don’t Exist” (tentative cover above), and so we’ll be working together to bring it to life!

An Itty Bitty Background on Self-Publishing vs. Traditional Publishing

For the most part, almost every single book we’ve published has been self-published. Meaning that we write, print, distribute, and sell our books on our own. Compared to traditional publishing, this is a very good way to go for making money, because even though you have to foot the whole bill yourself, all of the profits go back to you. We have been very happy with this route, and have been able to move a lot of books over the years. On the flip side, a traditional publisher usually gives you more street cred and has wider distribution channels that individuals and small publishers just don’t have.

The trick is getting them to pick you.

An Unlikely Unfolding of Events

A little over a year ago, a friend of mine emailed me a link to a an article in Writer’s Digest that gave a rundown of what big publishers look for in authors. I was surprised to see that the numbers for our email list and the number of speaking engagements were considered very favorable. I started to wonder if the time was right for us to pursue a traditional publisher.

A week later, out of the blue, a literary agent emailed me. I did not know at the time that she is the coolest literary agent in the history of ever. She said she’d seen one of my pieces of art on Facebook via a share from one of her friends, went to our website, and fell in love with our message. She told me about her roller coaster experience of clicking through our site, praying that we didn’t have any books, being crushed when she found them, and then rejoicing upon discovering that they were all self-published. She sent off an email wondering if I had ever considered traditional publishing and hoped to set up a meeting to discuss the possibility of working together.

I met Michelle at Panera, and was instantly impressed by not only how enthused she was, but how much she “got” what we were trying to do, and how the art and writing and speaking all worked together. It was a magical connection with no small amount of goosebumps.

We spent months working together crafting a proposal. At the end of April, Michelle planned to fly to New York to pitch all of the big publishers. A week before the trip, she sent an informal email to the contacts she was scheduled to meet with. We were thrilled that St. Martin’s expressed immediate interest. Michelle ended up getting a great response from a number of publishers, but in the end, it was St. Martin’s that proved to be the most enthusiastic and seemed the best fit. Rose Hilliard is the all-star editor I will be working with and I am humbled that she is such a champion for this book.

Here is the coolest news: This book is going to be 100% full-color and feature my artwork throughout all 200 pages. This is a huge financial commitment for them! Even more exciting is that I will not only be writing the book and creating all the illustrations, but I will be doing the full layout of the book as well. From what I know of the book industry, this is a super rare privilege!!!

I cannot explain how overjoyed I am about this opportunity; it truly is a dream come true.

A Long History of Spaghetti Throwing

As I mentioned, Kim and I have been married for 14 years. Every day of our marriage has been spent working on this mission to help people rekindle their childlike spirit and create lives with less stress and more fun. There was a bunch of throwing spaghetti against the wall, trying to see what would stick. Most of it didn’t. There were many years of living on a kindergarten teacher’s salary with a grocery budget of $100 a month. There was mounting debt as we struggled to find our way, countless crushing disappointments, and tear-filled nights wondering if we (and the close friends and family who believed in us) were in fact, certifiably insane.

We persisted because there was no Plan B. We knew we were put on this Earth to use our combined talents to fight what we now know as Adultitis. Slowly but surely, things began to work out. There were no big breaks, just a steady stream of small ones, spaced out in agonizing intervals. We were fueled by every email, every blog comment, every encouraging word from someone who thanked us for what we were doing.

This is as close to a big break as we’ve ever seen. But there is much work to be done and no guarantee of success.

I have a book to write. Art to make. And I feel a lot of pressure to knock it out of the park.

Never before have we had such an opportunity to spread the word about Adultitis and its evil intent. The potential is huge. Now, although my wildest dreams imagine this book landing on the New York Times bestseller list (boy, would that get Adultitis’ panties in a bunch!), the truth is that the odds are not in our favor. We are not celebrities. We do not have a millions of Twitter followers or Facebook fans. We do not have the publicity machine of a Stephen King or J.K Rowling.

But we do have you.

Whether you’ve been around since the beginning or stumbled upon us recently, you know the vileness of Adultitis and the value of the childlike spirit. You can make a big difference.

In the days and months ahead, I am going to be sharing the process with you as it unfolds. I’ll be giving you opportunities to get involved and help us spread the word. Right now, the best thing you can do, if you haven’t already, is sign up for our newsletter and like us on Facebook. Apparently, when the time comes for the publisher to decide how many books to print, the number of newsletter subscribers and Facebook fans can be a BIG factor. Also, if you’re the praying type, we’ll take prayers as well. I am convinced that this whole opportunity is largely the work of Mary. Yes, that Mary. (More on that story later, if you’re interested.)

I’m excited to see where this road leads, and I’m excited to share the journey with you. I hope you’re as inspired as I am by Margaret Mead, who said, “Never doubt that a small group of thoughtful people could change the world. Indeed, it’s the only thing that ever has.”