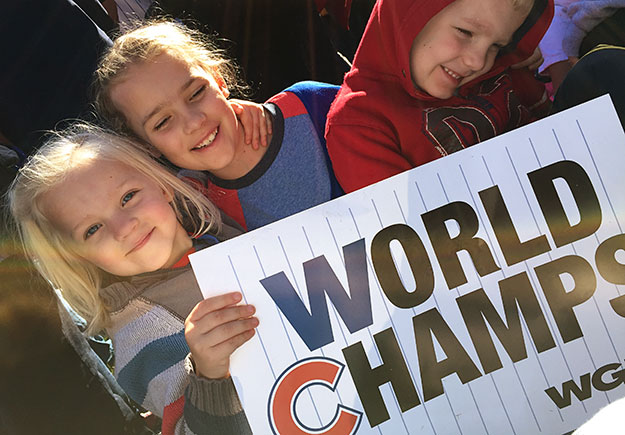 It was Kim’s fault.

The Cubs, after 108 years, had finally won the World Series, and they won it in spectacular fashion. (I can’t believe I just wrote that!) THE CUBS HAVE WON THE WORLD SERIES. For reals. I am still filled with joy and brimming with happiness. But the thought of driving to Chicago for the victory parade never crossed my mind.

Kim floated the idea after reminding me that I had a speaking engagement in Chicago a few days later. “Why not go down earlier and make it a long weekend?” she teased.

Thoughts of snarling traffic and being trampled to death by a raucous mob sprung forth. “Are you serious? That’s insane!” I replied.

When she got online to look for hotel rooms, I knew she was both.

She found an unbelievable deal on a hotel room steps away from Grant Park, where the rally was to be held. The confident sparkle in her eye and the call for adventure was too strong. We packed up the kids and drove to Chicago a few hours later. 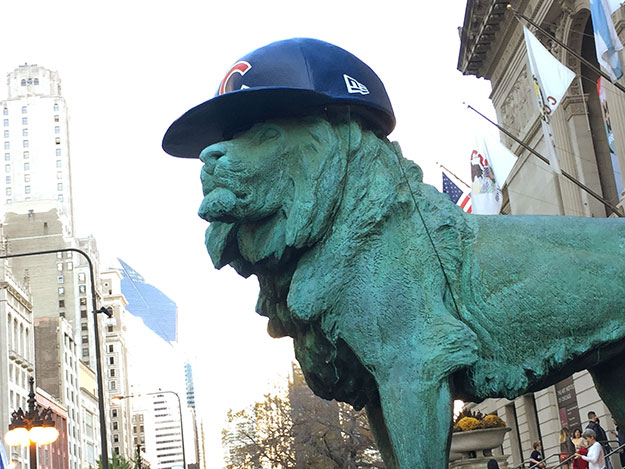 Oh, there were plenty of excuses to stay home. There are always reasons why something might not work. Life is never shy about providing opportunities for adventure, but we miss most of them because we’re too busy letting our excuses run the show.

Kim and I are not gluttons for doing things that are destined to fail. But attempting something that might not work is a different matter entirely. Many people mistake them for being the same. They are not.

Pretty much everything in life might not work. They say the only certainties in life are death and taxes, and in my experience, neither are Adultitis-free endeavors.

But this. This worked perfectly. Traffic into the city was a breeze. The location of our hotel, as I mentioned, was ideal. The weather was spectacular; not a cloud in the sky and more reminiscent of a September day than the November one that it was. The spot we secured on a small hill to the right of the stage was perfect: near a big screen but close enough to see the stage. We were only a hundred feet from the porta potties, and the incline kept us out of the mud, just outside the current of human traffic, and provided an opportunity to sit while we waited. 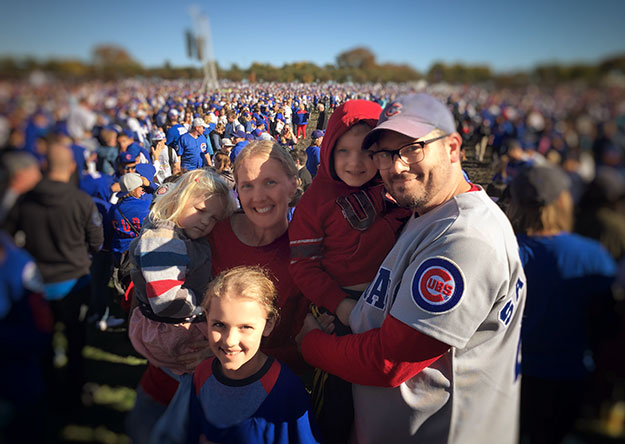 There were a LOT of people. The crowd size, between the parade and the rally, was reportedly 5 million people. That’s good enough for #7 on the all-time list of largest groups of humans ever assembled (the biggest ever in America). It was also reported that there were only five arrests. The mass of humanity we encountered was joy-filled, kind, and patient. A lady next to us gave her blanket for our kids to sit on, and she offered them some pizza too. The kids cheered for their favorite players, and joining the chorus of “Go Cubs Go” at the end was pure magic.

I was so thankful for the opportunity to be there for the celebration. It helped make the victory even more real, as it’s still hard to believe the Cubs actually won the World Series. It truly was the experience of a lifetime. 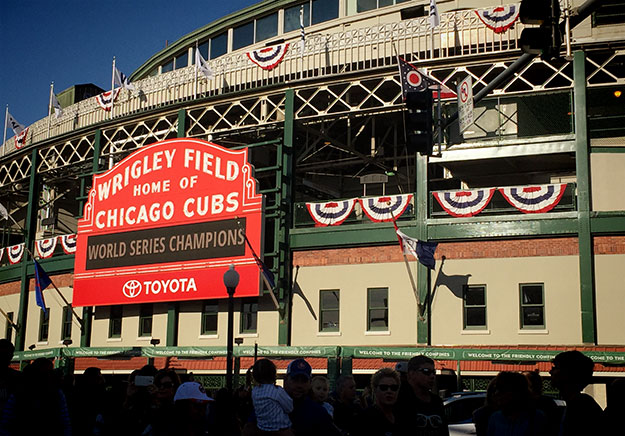 As good as this team is, there is no guarantee that they’ll win another World Series any time soon. Even if they did, it wouldn’t be nearly as historic as this one was.

Heck, there is no guarantee that I’ll even be alive a year from now.

I know that may be morbid, but Kim and I think about these types of things all the time. I might not be here a year from now. Kim might not, either. It terrifies me to consider the same is true for each of my children. At the very least, I will never again have a seven-year-old Lucy, a four-year-old Ben and a two-year-old Ginny. All the more reason to jump on any adventure that presents itself. 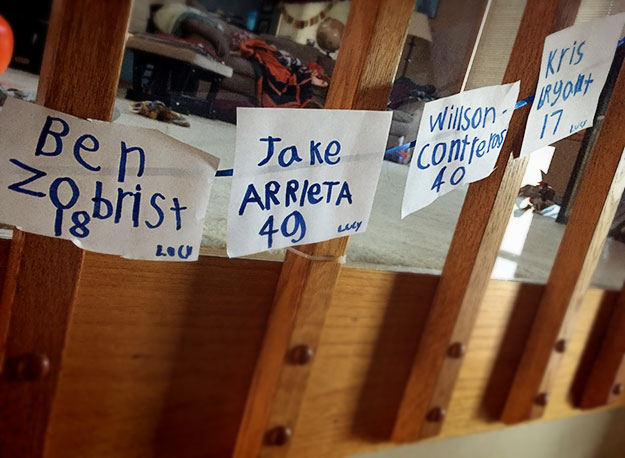 We prepare for rainy days, but we also know that sometimes, rainy days don’t come. We‘ve done too much work with the Make-A-Wish Foundation and have known too many friends die way too young to lose sight of this fact:

Every single day is a precious gift. Waiting for the conditions to be just right before you make the most of it is as tragic as it gets.

One of the reasons I do what I do as an artist, author, and speaker is to help people have as few “I wish I woulda’s” as possible. And selfishly, that starts with me. I spent most of the first 21 years of my life too afraid to do anything. I missed opportunity after opportunity because I was too focused on all the things that could go wrong, all the ways I might feel uncomfortable, fail miserably, or experience embarrassment.

I succeeded in staying safe and for the most part, avoiding disaster. If there was a merit badge for maintaining a tidy comfort zone, I earned it. But at what cost? How many amazing memories never materialized? How many adventures floated by, unclaimed?

When I look back at my life, all of the greatest things that have ever happened to me, happened when I was pushed or more recently, intentionally stepped out of my comfort zone. Every. Single. One.

I’m happy to say that after years of tinkering and taking tiny steps into the unknown, the call to adventure has become stronger than my fear of failure.

When faced with an exciting opportunity that also scares the bejeezus out of us — and believe me, bringing three kids under eight into a throng of partygoers did that — there are three questions we ask ourselves:

1) Will this mortgage our future? We are willing to stretch the budget and borrow a bit from the rainy day fund to invest in an adventure, but we don’t do anything that puts an undue risk on our family’s future.

2) What if it doesn’t work? We are not Pollyannas, setting out to climb a mountain in flip-flops, hoping that everything will work out. Being honest about what could go wrong helps us to prepare contingency plans that minimize disaster and increase our odds of success.

3) What if it does? This is the one that most people don’t put enough emphasis on. They assemble the list of cons and use that as evidence for standing pat. It doesn’t take a creative genius to come up with reasons how taking your kids or into the heart of five million people could turn into an hot pile of bad. But we’ve come to see how right Mark Twain was when he said, “Twenty years from now you will be more disappointed by the things you didn’t do than by the ones you did do.” After the adventure is over, any negative incidents either fade away or end up making the story even better, while the positive memories strengthen.

After the rally was over, and the crowd had largely dispersed, we bought a deep dish pizza from a vendor and found a sunny spot to sit in the grass. Somewhere within the fifty-seven seconds it took for our family to devour that helpless circle of cheese and dough, Kim and I looked at each other and said, “We did it.”

We conquered our fears, were part of history, and added another thrilling adventure to our life’s portfolio. 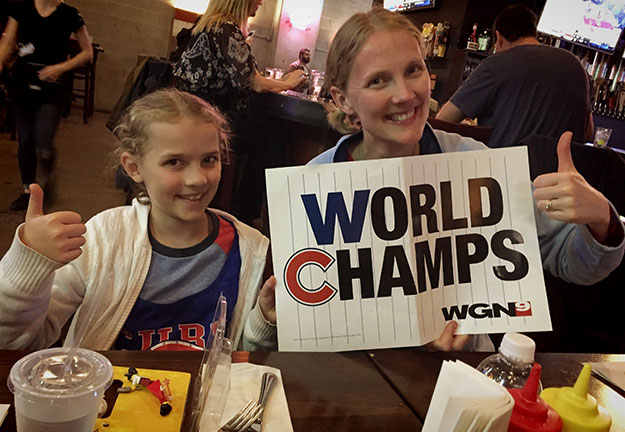 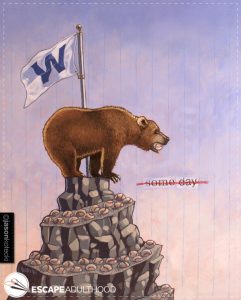 P.S. I started this oil painting after the Cubbies won the pennant, but could not get myself to finish it when they fell behind in the World Series. The path to the top of mountain is paved with baseballs, which represent the 108 years of futility. The ball in the mouth of the cub has the year 2016 written on it, a year I will never forget. As a lifelong Cubs fan, there are no words to describe the satisfaction of finishing this painting with the strike through the word “someday.” Finally, after so many years of ups and downs, the Cubs are the World Series Champions. #FlyTheW