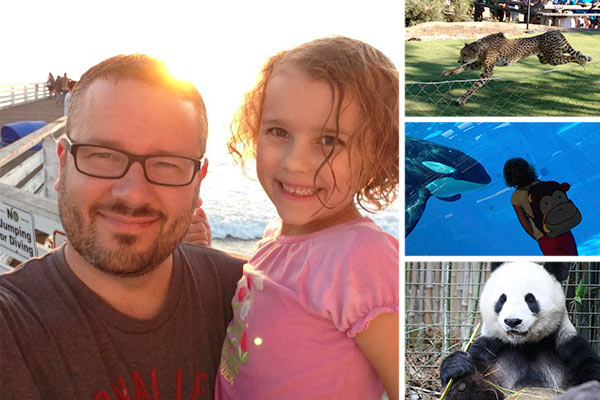 The white dog bounded down the skinny green runway, chasing a stuffed animal attached to a steel cable. In just ten seconds, the race was over, and Yeti had her prize. Meanwhile, her best friend was looking on. After the steel cable was reset, this time with a small stuffed zebra, a trainer readied herself in front of the big box where Shiley stood poised. The trainer raised her hand while unlatching the door on the cage, and then dropped her arm to indicate it was time for the wench operator at the other end of the track to get that zebra moving. The door flung open, and a flash of fur and speed exploded from the box. Shiley, a South African cheetah, pursued his prey with abandon. The big cat traversed the 330-foot track in just three seconds. It spent half of that time with all four feet off the ground.

This is what we had come to see, the world’s fastest land animal doing what it does best. If you blinked, you’d probably miss it. But we were too excited to even breathe, let alone blink. It was one of the highlights of the four days I spent in San Diego last week with my daughter Lucy. I had a speaking engagement at the front end, so it was our first Daddy Daughter business trip.

It was a trip we will both remember for the rest of our lives, and I hope it’s just the first of many. Here are a few thoughts from my experience.

I had a friend in high school who hated going out to eat. He preferred spending money on things like fancy baseball hats or the latest rap CDs. (This was the late 90s.) His rationalization was that the meal was too quickly over and done with, while at least with a hat or CD, he had something to show for it long term. Makes sense intuitively, but it turns out that it’s not the route to happiness. A recent article in The Atlantic underscores that a decade of psychology research has confirmed that experiences bring us more happiness than do possessions. Author James Hamblin writes:

Most of us have a pretty intense capacity for tolerance, or hedonic adaptation, where we stop appreciating things to which we’re constantly exposed. iPhones, clothes, couches, et cetera, just become background. They deteriorate or become obsolete. It’s the fleetingness of experiential purchases that endears us to them. Either they’re not around long enough to become imperfect, or they are imperfect, but our memories and stories of them get sweet with time. Even a bad experience becomes a good story.

It’s true, isn’t it? As exciting as it is to buy a new gadget, car, or even a home, it doesn’t take long for it to become old hat, keeping us on the never-ending treadmill chasing the next big thing. Meanwhile, with our experiences, the biggest disasters often turn into the best stories. Before feeding a rhino at the San Diego Zoo, the trainer told us to remove any loose rings or jewelry on our hands. She assured us that we’d eventually get any lost items back, but we’d have to wait three days, if you know what I mean. I’m not sure I’d want a rhinoceros to swallow my wedding ring, but it sure would make for a pretty good story when I got it back.

It’s Not About Money, it’s About Intention.

Granted, we really splurged on a few things for this trip. Frankly, none if it would have happened were it not for the speaking engagement, which subsidized part of the travel. The big highlights were the cheetah run, a backstage experience at the San Diego Zoo (which also involved a cheetah!), and having lunch with Shamu at Sea World. But we had just as much fun swimming at the hotel pool, eating pepperoni pizza in bed, and playing in the waves at Pacific Beach. Some of my fondest memories from childhood were of the modest three-day road trips my family took just a few hours away from our home.

That being said, if you’re going to break the bank for something, an experience will give you more bang for your buck.

Anticipation Is Where The Magic Is.

The Atlantic article talks about how the mere act of waiting for an experience elicits more happiness that waiting for a material good. It compares the giddy anticipation of a delicious meal at a nice restaurant versus the impatience that comes with waiting for your pre-ordered iPhone to arrive.

I can certainly relate to that. This trip has been months in the making, and every day leading up to it was tantalizingly delightful for both of us. Anticipation is the electricity of childhood. Waiting for this trip reminded me of waiting to see what goodies Santa left under our tree on Christmas morning.

Kim and I kept the cheetah experiences a secret for a long time because we know that when you’re dealing with animals, there are no guarantees. But as soon as I knew it was safe, I let Lucy in on the surprise, because I knew that anticipation is an important part of the overall experience.

“Savoring future consumption for days, weeks, years only makes the experience more valuable. It definitely trumps impulse buying, where that anticipation is completely squandered. (Never impulse-buy anything ever.)”

Most people take photos of their vacations. (Sometimes it’s to the detriment of actually experiencing the thing we’re trying to capture. I will admit that I missed out on a few things because I was too busy futzing with the F-stop.) Photos are great, but another thing I highly recommend is making a memory list. It’s not a journal, it’s a a short list of details you jot down shortly after your experience. Here are a few examples from the course of our trip:

Memory lists are an excellent way to record the things that might not have been captured on camera. (It’s not like I was taking selfies of us wrestling.) And it’s always amazing how years later, even a simple sentence fragment can introduce a flood of specific memories that might have otherwise been lost.

Traveling with Kids is a Drag.

Literally. Kids have a tendency to slow you down when you travel, which is a big reason why many people don’t enjoy it.

As if it’s a problem.

Yep. Lucy definitely slowed us down. It took longer to do almost everything. But instead of nagging her to keep up all the time, I slowed down to her pace. And I noticed things I might not have otherwise noticed. Like a flamingo feather I found on the ground that I swear was more valuable to her than any souvenir we bought. The only reason I noticed it was because she collected about three thousand bird feathers on the trip.

Too often, in our rush to the next thing, we miss out on the treasure right in front of us. Slowing down is almost always a good thing.

I plan to keep using my time, energy, and money to create as many memories with my kids as possible. They’re growing up faster than a speeding cheetah.

The last thing I want to do is rush things along, let alone blink.

What’s the best experience you’ve ever spent money on, even if you were a little nervous about the expense at the time?