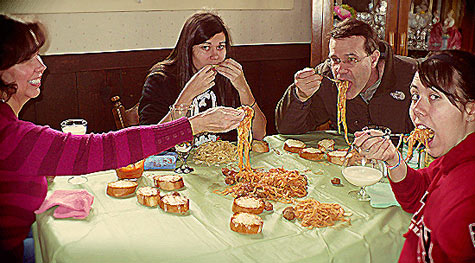 As casual as our culture sometimes seems, we are still quite uptight in many areas. Much of it comes from caring about what other people think of us.

Young children, of course, have no such concerns. They dance openly with reckless abandon, would happily wear princess dresses to the supermarket, and wouldn’t think twice about picking their nose right in front of you.

While not always appealing, their actions underscore — quite dramatically — this fact: they really don’t care what you think.

Adultitis thrives when we wrap ourselves in cocoons of inhibition. It’s happy when we are overly cautious, timid, and obedient to the rules that don’t exist. Especially when there is no reason to be.

I often share a simple idea during my speaking programs, and I invite you to try it as well. Next time you have spaghetti…don’t use plates. Just plop the spaghetti in the middle of the table, and have the meal participants pull their portions toward themselves. (An audience member once dubbed this “Barbarian Spaghetti,” which I love.) Few ideas have the power to divide a room in an instant like this one does. The moment I mention it, some people’s eyes light up with eager anticipation. Most recoil in the horror of the mess that’s sure to be made. (And what the neighbors might think!) Even my suggestion of using a plastic tablecloth to make clean-up a breeze does little to convince them.

But every once in a while, someone runs with it, and I get photos like the one above, with stories like this, from Lisa Johnson of Minnesota. She wrote:

“My daughter and I enjoyed your visit to Mankato’s St. Joseph the Worker church. We had to surprise the other two members of the family with a Spaghetti dinner for my daughter Amber’s birthday. She had so much fun dumping the noodles on the table and spreading the sauce all over. I think it has inspired many others on my Facebook page to try the same thing! Great idea!”

It IS a great idea, but all I can take credit for is sharing it, just like Lisa did. Because an audience member once shared it with me.

Sometimes we attribute courage with fighting cancer, leaving an abuser, or taking a bullet for someone else. And indeed, these are courageous acts of the highest level. But sometimes being courageous simply means being willing to do something a little unconventional regardless of what others might think of us.

Would the idea of Barbarian Spaghetti make Miss Manners hyperventilate and possibly slip into a coma? Probably.

Is it messy and cheap and simple and silly and childlike and fun?

And what are the odds that the participants will have created a scene they will not soon forget?